2 Up Up and away with Air China

Having made our way to Gate 32, you could easily pick those in our group. As us Greeks would say, we were the "xeni" in a plane load of Chinese. 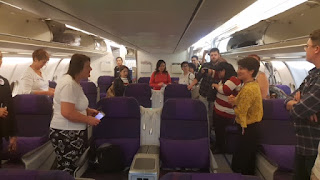 Identified by our special SNA badges, once we had all arrived we were ushered straight onto the plane. Our Famil tour had started. Taken into Business class we were given the run down on Air China, teased with Business class (no First on this plane), walked through premium economy and finally settled into our cattle class. 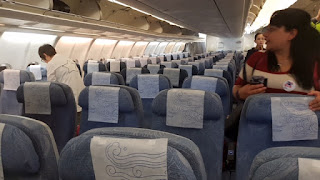 The configuration was 4 seats in the middle and 2 on each side by the windows. We had the 2 seats by the window. It felt like we had more leg room than our last A380 flight, drop down leg rest and all the usual trimmings that come with it. 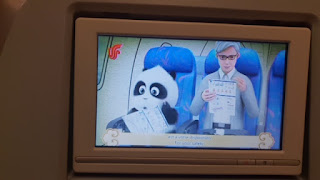 Wasn't long and I lost Carly to a centre row that had only one person in it.. Nice, now I had the 2 seats to myself. Once up in the air, off came the shoes up went the armrest and I was set for the rest of the flight. Another track record, if I have a window seat, you can bank on it being on the wing!..... Yay what a great view of Sydney when we left! 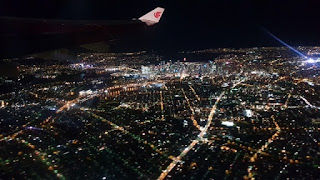 What took 5 minutes to say in Chinese our translated announcement only took at most a minute. Now I am pretty good at understanding accents, but it was only the odd word that I could understand, "seat", "dinner", "wine", I have flown enough to link all the words together.

They fed us dinner, dimmed the lights and settled us in for our 11 hour flight.

Carnjo's Tip of the day - if you have Netflix download a selection of movies or shows to watch... not a big selection for us foreigners on their inflight entertainment.
Posted by Garry & Joanne at 11:16 AM