1 Embarkation of another kind. 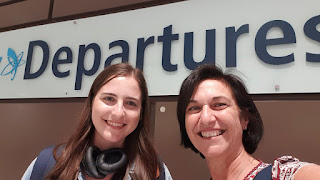 Today was different to what we are used for a first day of our holidays. There was no waking up, eating the last of the food left in the fridge or leaving home at 10am for an 11am check in on a cruise ship.

Instead this morning we lazed around, got out of bed with enough time to shower and be at my hair dressers appointment by 9 am.

There was no rushing or sense of urgency when Garry met me for coffee, then called into the supermarket for a few things that we had run out of. For today we didn't need to be at the airport until after 5pm.

Our instructions where to meet our host July (pronounced Julie) at the Air China check in counters at 7pm. By this time Garry and I had had our tearful goodbye, well maybe not quite like Bogie and Bacall , but with lots of hugs, kisses and sad faces,  we waved each other goodbye.

But the pout soon turned to a grin, and with my Carly, we were ushered into the vip check in line. Woohoo we were on our way.

Our next instructions at check in were, meet at gate 32 one hour before take off. Great plenty of time to pass immigration, security and TRS.

Immigration, new system, a bit like when you arrive back, place passport into scanner, move forward place your feet on the footprints and look into the camera. Carly tick, Joanne, bong bong. "This way mam", a manual check for me, surely I don't look that different.

Ok, now security, Carly had warned me "mum, I always get swabbed"...... Joanne Tick, Carly bong bong. Off she goes for the mandatory wiped down"

Thinking that I was being clever, I had downloaded the TRS App where I could populate all the information into a claim form, press a button which gives me a QR code that can be scanned to expedite the process at the terminal. Well was there a crowd there or what... Feeling very clever I joined the shorter QR line, which only ended up being shorter in appearance but longer in time.

Finally with the formalities completed headed into the flashy and colourful world of Duty Free Shopping. With Garry's comment "nothings cheap at the airport" still ringing in my ears we moved through at a steady pace. But I did succumb to a couple of bottles of Chambord which I will pick up when I arrive back in Sydney.
Posted by Garry & Joanne at 10:30 AM